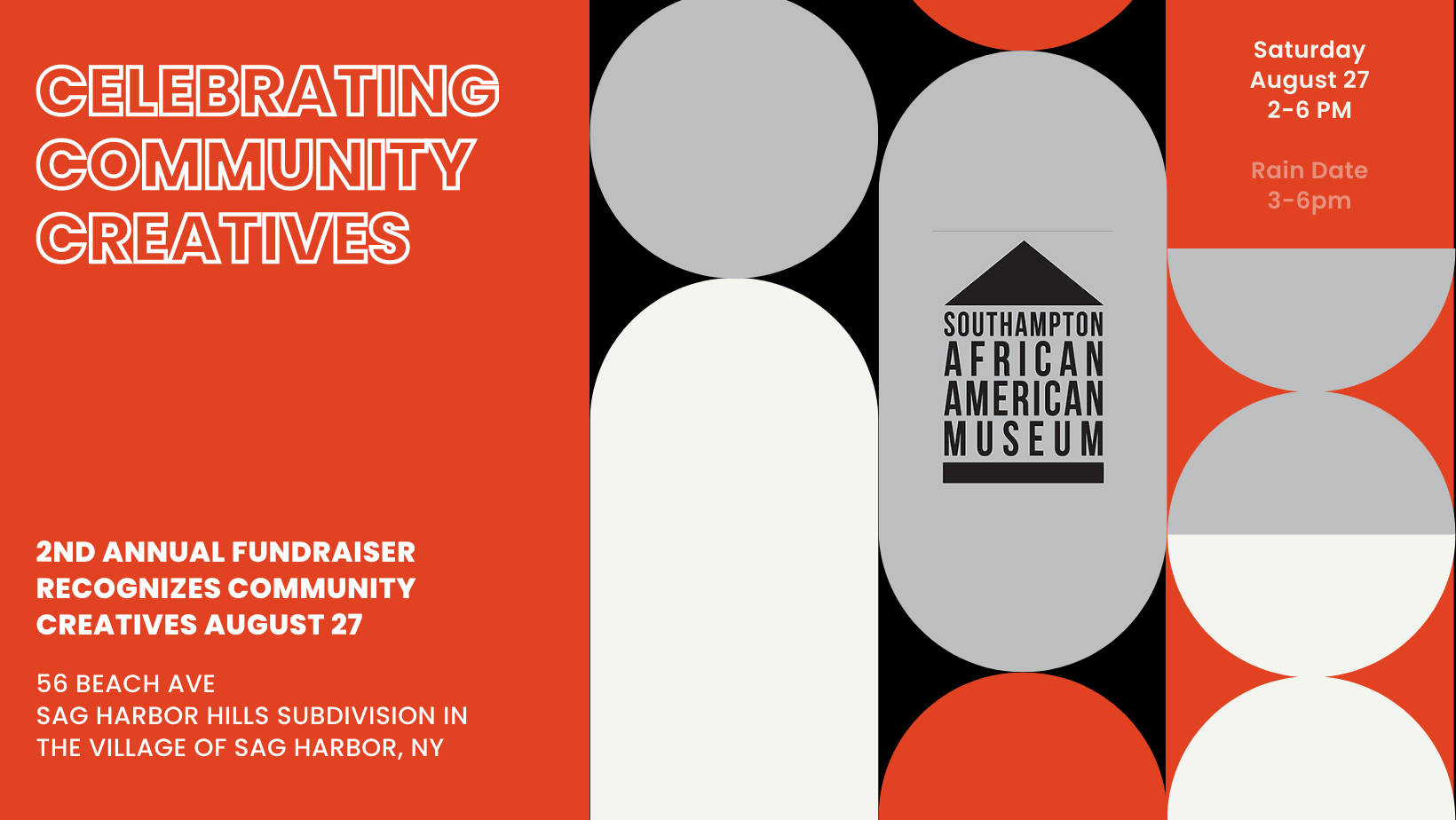 After a successful inaugural fundraiser supporting local artists and authors last year, a local collective of women art enthusiasts will once again host an Annual Fundraising outdoor event showcasing about 15 local creative artists and authors from the Sag Harbor area. This event is FREE to the public and will be held at 56 Beach Ave. in the Sag Harbor Hills subdivision in the Village of Sag Harbor, NY on Saturday, August 27 from 2-6pm (Rain Date from 3-6pm).

While the Sag Harbor area is coming out of the pandemic, the event’s hosts want to help expand exposure and opportunities to showcase local noteworthy works. This, the 2nd Annual Fundraiser will showcase books or artwork of known and less known creative personalities including Sunny Hostin, Linsey Davis, Noel Hankin, and Donnamarie Barnes. All artwork and books will be available for sale.
According to one of the featured photographers and long-time Sag Harbor resident, Donnamarie Barnes, noted, “For many years, residents have sponsored neighborhood Art Shows. We believe it is not only important to showcase local creative talent, but also ensure that we support those community institutions that provide the infrastructure and platforms ensuring continued learning, broad accessibility, and enhanced cultural understanding.”
The host group will also honor the well-known nonagenarian artist, Frank Wimberley, for his art and notable participation and contributions to local community fundraising and artistic endeavors. Importantly, proceeds from this event will benefit and support the Southampton African American Museum (SAAM) and its mission “to promote an understanding and appreciation of African American culture by creating programs that will preserve the past, encourage learning and enhance the life of the community. SAAM will research and collect local history, produce media events, create exhibitions and community celebrations.”

Saleem Abdal-Khaaliq is a long-time educator and comes to Sag Harbor via New York City by way of Massachusetts. A creative writer and poet; author of Mind Sand and is currently working on a new book. His work has appeared in Obsidian, River Crossings: Voices of the Diaspora. and he has read at Cornelia Street Café, X Gallery, Harlem Book Fair, and other venues. Find him at mindsandbook.com or get in touch at pentouch2007@gmail.com.

Dr. Linda Anderson, a long-time resident of Ninevah, is a psychologist in private practice, CUNY professor, consultant to the Dalton School and author.
Currently, Drs. Linda Anderson, Sonia Banks and Michele Owens, co-authors of Silent Agreements: How to Free Your Relationships of Unspoken Expectations, support individuals, teams, and organizations to unpack the unspoken silent agreements in the workplace and specialize in addressing communication challenges that impact inclusion, equity and belonging as well as work life balance, and leadership development. They can be reached at 858-848-7830; or https://www.facebook.com/SilentAgreementBook/

Donnamarie Barnes. As a life-long summer and now full-time resident of Ninevah Beach in the historic SANS Community of Sag Harbor, Donnamarie Barnes grew up photographing the community and the beach landscape. She is currently the Curator & Archivist at Sylvester Manor on Shelter Island where she curated the exhibitions, “Women of the Manor”, “A Place in Pictures” and “All That Has Been: Our Roots Revealed”. Her ongoing work at the Manor involves researching, uncovering, and telling the stories of the enslaved and indigenous people of Sylvester Manor and conserving the various collections held at Sylvester Manor. Donnamarie is also the Co-Director of the Plain Sight Project, a not for profit organization dedicated to uncovering, naming and counting the enslaved and free people of color of the East End of Long Island. For over thirty years she worked in the editorial photography field as a photographer and photo editor for publications such as People and Essence Magazines and as a Photo Editor at the Gamma Liaison International Photo Agency. In 2015, she curated a highly-acclaimed historic tintype photography exhibition at the Eastville Community Historical Society in Sag Harbor entitled, ” Collective Identity”. She holds a Bachelor of Fine Arts degree in Photography from the Cooper Union School of Art.

Martin Butler has painted mainly in watercolors since he took a college course in the 1970’s Works might incorporate gouache and plant-based pigments.

Michael Butler is a self-taught artist. His works are narrative in style, often depicting “imagined realities” of a historical nature. His medium of preference is acrylic on canvas for its ease of use and fast drying time.

Linsey Davis is currently an anchor for ABC News Live Prime, which is ABC News Live’s first-ever streaming evening newscast, and weekend “World News Tonight” on Sundays. She is a correspondent filing reports for “World News Tonight,” “Good Morning America,” “20/20” and “Nightline.” Davis’ three children’s books, “The World is Awake” (February 2019), “One Big Heart” (August 2019) and “Stay This Way Forever” (February 2021) have all become bestsellers. Her fourth children’s book “How High is Heaven” came out February 2022.

Katherine Brown Drucker received a Bachelor of Fine Art Degree from Howard University, majoring in design under the famous watercolorist Lois M Jones and traveled abroad to the Middle East Technical University in Ankora, Turkey studying architecture and education. After graduation, she moved to NYC attending city college and completed a Masters in Early Childhood Education as well as a BAFTA Special Education Degree from College of New Rochelle and became an Elementary School Art Teacher and Phonics specialist. She remained active in the arts, mastering batik painting, writing children’s books, drawing and entering numerous art shows in Westchester. Katherine received three awards and honorable mention for various pieces in different mediums including Collage, Watercolor, Printmaking, Etching and Metal work. Presently she’s a retired artist, spending her time in Bronxville and East Hampton as a proud Mother of three and Grandmother of three, with another on the way!

Beverly (Bebe) Granger discovered her passion for working with clay at the Hinckley Pottery Studio in Washington D.C. in the late 1970’s. Over the years, she used her home studio as a retreat from the demands of professional life and child rearing, finding that centering the clay on the wheel made her feel emotionally centered. In recent years, she has renewed her commitment and
devoted her energy to further exploring the world of clay. Her focus has been primarily wheel-thrown functional work but has recently ventured into the realm of hand-building. This has resulted in a broader body of work that includes more complex and intricate forms. Her goal is to create pots that are both functionally and esthetically pleasing.

Noel Hankin is a founder of The Best of Friends, Inc. (TBOF), a pioneering business enterprise that promoted discotheques in New York City starting in 1971. He is the author of After Dark: Birth of the Disco Dance Party, that reveals how TBOF identified a social need in New York City in 1971 and ignited the most important social and cultural happening of the 1970s – the disco boom. Three of their clubs, Leviticus, Justine’s, and Bogard’s, were among the first black-owned clubs in midtown Manhattan.
Judith Henriques-Adams Judith is a veteran art teacher & attended Howard University, Pratt Institute and Parsons School of Design. Her artwork is both realistic and abstract painting. She and her husband Robert make their home in Sag Harbor.

Sunny Hostin is a three-time Emmy Award-winning legal journalist, New York Times bestselling author, and co-host of The View. In May 2021, Hostin released her debut novel, “Summer on the Bluffs” (William Morrow), which skyrocketed to #11 on The New York Times Bestseller List, the first book in her “Summer” trilogy. In the fall of 2020, Hostin released her memoir, “I Am These Truths: A Memoir of Identity, Justice, and Living Between Worlds,” with HarperOne. Hostin has been featured in The New York Times, The Wall Street Journal, Forbes Woman, Essence, Newsweek, The New York Post, Latina, and Ebony. A sought-after public speaker, she has delivered a TEDxTalk called “A Possibility Model” and spoken at and moderated panels for the U.C. Berkeley Graduate School of Journalism, Corporate Counsel Women of Color, and the National Bar Association, and served as a witness at the Federal Judiciary’s Congressional Hearing for the Public’s Right of Access to the Courts. Hostin lives with her husband and two children in New York.

Victoria Pinderhuges was drawn to jewelry making since High School when I took my first wax carving class. Nearly ten years ago, I began to pursue my love of jewelry by learning various techniques including bead stringing, wire wrapping, silver soldering, and polymer clay at FIT, 92nd Street Y, and Riverside Church. My work has evolved from one-of-a-kind personal creations to designs specially made to adorn others. Created with Love – Made in NYC!!

Ernani Silva has exhibited at the Parrish last summer. As a young man, Silva relocated to the United States, where he was encouraged as an artist by Prof. H. Blake of Columbia University. Silva’s distinctive reflects his Brazilian cultural influence. His creations are an amalgam of dance, rhythm, music and color, which reflect his rich mystical heritage and history. Silva has always worked with various mediums; creating new textural forms and compositions. By infusing collages, acrylic, oil and organic elements, he brings a new dimension through multimedia. He exhibited at the Parrish last summer.

Kamoy Smalling is a self-taught artist who creates figurative and still-life pieces that explore the complexity of the human condition by unmasking the psychological terrain. A graduate of Harvard College and Harvard Business School, Kamoy began her career as a financier and often uses avatars and dark humor as a way to examine concepts of race, femininity, otherness, and the construction and deconstruction of “success” in corporate settings. Based in Brooklyn, NY, Born 1988.

Frank Wimberley. Born in Pleasantville, New Jersey in 1926, abstract expressionist painter, Frank Wimberley later attended Howard University and studied with James Porter, Lois Mailou Jones and James Wells. While a student, he also played jazz (a consistent theme in his work) and later became friends with musicians such as Miles Davis, Ron Carter, and Wayne Shorter.
Frank currently lives and works from studios in New York City and in Sag Harbor on the East End of Long Island. Frank Wimberley has had numerous solo and group gallery and museum exhibitions, including at Gerald Peters and June Kelly Galleries in New York, and at Guild Hall Museum in East Hampton, Parrish Art Museum in Water Mill, The Heckscher Museum of Art in Huntington, NY and Berry Campbell Gallery. Several works by the artist have been sold at auction, including at Swann Auction Galleries and are in private and public collections nationally including the Parrish Art Museum.